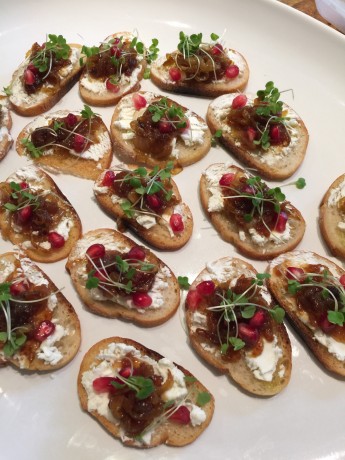 The sweet-tart red pomegranate seeds and arugula microgreens with goat cheese and caramelized onions give this appetizer a festive, holiday hue. Prep can be done ahead of time.


Good Way to Open a Pomegranate

I’ve tried many different methods suggested for opening a pomegranate over the years, but the best one came from Abe, an employee at my local Whole Foods Market who originally hails from Egypt. With a paring knife, cut a circle the size of a quarter around the top and bottom ends of the pomegranate and remove each circle. Use the knife to score the fruit on the outside in 4 even quarters, just cutting through the thin red peel, not through to the seeds. Open the fruit into quarters, and nudge the seeds out with your fingers over a bowl. Discard any white pith.
Pomegranate season seems to stretch longer and longer each year, but it’s primarily a fall-early winter fruit.